Welcome to our New York City Photo Gallery. This is a photograph from New York City. It shows the Brooklyn Bridge with the New York City skyline silhouetted at dawn or dusk. The world trade centre twin towers can also be seen. 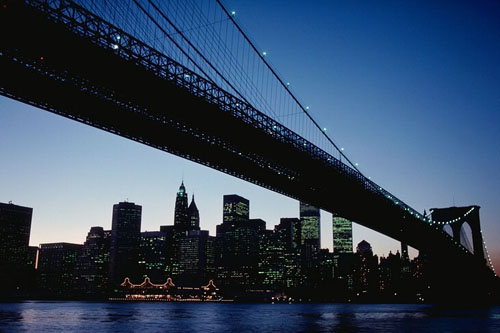 Construction began in 1869. The Brooklyn Bridge was completed fourteen years later and was opened for use on May 24, 1883. On that first day, a total of 1,800 vehicles and 150,300 people crossed. The bridge's main span over the East River is 1,595 feet (486 meters). The bridge cost $18 million to build and approximately 27 people died during its construction. A week after the opening, on May 30, a rumor that the Bridge was going to collapse caused a stampede which crushed twelve people.

At the time it opened, it was the longest suspension bridge in the world — fifty percent longer than any previously built — and has become a treasured landmark. Additionally, for several years the towers were the tallest structures in the United States. Since the 1980s, it has been floodlit at night to display its architectural features. The architecture style is Gothic, with characteristic pointed arches above the passageways through the stone towers.

The bridge was designed by an architectural firm owned by John Augustus Roebling in Trenton, New Jersey. Roebling and his firm had built smaller suspension bridges, such as the John A. Roebling Suspension Bridge in Cincinnati, Ohio and the Waco Suspension Bridge in Waco, Texas, that served as the engineering prototypes for the final design.

As construction was beginning, Roebling's foot was seriously injured in an accident; within a few weeks, he died of tetanus. His son, Washington, succeeded him, but was stricken with caisson disease (decompression sickness), due to working in compressed air with the sandhogs, and was only capable of limited speech or movement. Washington's wife, Emily Warren Roebling, trained herself in engineering so she could communicate his wishes to the builders. When the bridge opened she was also the first person to cross it. Washington Roebling was unable to leave his home and watched the construction through a telescope. 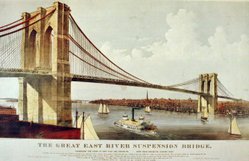 At the time the bridge was built, the aerodynamics of bridge building had not been worked out. Bridges were not tested in wind tunnels until the 1950s - well after the collapse of the Tacoma Narrows Bridge in the 1940s. It is therefore fortunate that the open truss structure supporting the deck is by its nature less subject to aerodynamic problems. Roebling designed a bridge and truss system that was six times as strong as he thought it needed to be. Because of this, the Brooklyn Bridge is still standing when many of the bridges built around the same time have vanished into history and have been replaced. This is also in spite of the nefarious substitution of inferior quality wire in the cabling supplied by a contractor - by the time it was discovered it was too late to replace the cabling that had already been constructed. Roebling determined that the poorer wire would leave the bridge four rather than six times as strong as necessary, so it was eventually allowed to stand.

At various times, the bridge has carried horses and trolley traffic; at present, it has six lanes for motor vehicles, and a separate level for pedestrians and bicycles. The two inside lanes of the lower level once carried elevated trains of the BMT from Brooklyn points to a terminal at Park Row. Streetcars ran on what are now the two center lanes (shared with other traffic) until the BMT stopped using the bridge in 1944, when they moved to the protected center tracks. In 1954, the streetcars also stopped running, and the bridge was rebuilt to carry six lanes of automobile traffic.

The BMT bridge tracks were planned to connect to what is now the Nassau Street Line subway at Chambers Street to form part of the never-finished Centre Street Loop.

The bridge was placed on the National Register of Historic Places on June 17, 1977 and on March 24, 1983 the bridge was designated a National Historic Engineering Landmark.

On March 1, 1994, Lebanese-born Rashid Baz opened fire on a van carrying members of the Lubavitch Orthodox-Jewish sect, striking 16-year old student Ari Halberstam. Halberstam died 5 days later from his wounds. Baz was apparently acting out of revenge for the Hebron massacre of 29 Muslims by Baruch Goldstein that had taken place days earlier on February 25, 1994. Baz was convicted of murder and sentenced to a 141-year prison term. After initially classifying the murder as one committed out of road rage, the FBI reclassified the case in 2000 as a terrorist attack. The entrance ramp to the bridge on the Manhattan side was named the Ari Halberstam Memorial Ramp in honor of the victim.

The construction of the Brooklyn Bridge is detailed in the book The Great Bridge by David McCullough and in a PBS film by Ken Burns.

Contemporaries marveled at what technology was capable of and the bridge became a symbol of the optimism of the time. John Perry Barlow wrote in the late 20th century of the "literal and genuinely religious leap of faith" embodied in the Brooklyn Bridge . . . the Brooklyn Bridge required of its builders faith in their ability to control technology."

References to "selling the Brooklyn Bridge" abound in American culture, sometimes as examples of rural gullibility but more often in connection with an idea that strains credulity. For example, "If you believe that, I have a wonderful bargain for you . . ." However, see also Victor Lustig.

In his sophomore book The Bridge, Hart Crane begins with a poem entitled "Proem: To Brooklyn Bridge." The bridge was a source of inspiration for Crane and he owned different apartments specifically to have different views of the bridge.

A TV show called Brooklyn Bridge aired in prime time from 1991 through 1993.