Welcome to our Niagara Falls Photo Gallery. View of Horseshoe Falls from the Canadian side. Taken August 2004.

Horseshoe Falls, also known as Canadian Falls, is the largest of the three waterfalls that collectively form Niagara Falls on the Niagara River along the Canada-United States border. Approximately 90% of the Niagara River, after diversions for hydropower generation, flows over Horseshoe Falls. The remaining 10% flows over American Falls and Bridal Veil Falls. It is located between Terrapin Point on Goat Island in the US state of New York, and Table Rock in the Canadian province of Ontario.

When the boundary line between the United States and Canada was determined in 1819, based on the Treaty of Ghent, the northeastern end of the Horseshoe Falls was in New York, United States, flowing around the Terrapin Rocks, which were once connected to Goat Island by a series of bridges. In 1955, the area between the rocks and Goat Island was filled in, creating Terrapin Point. In the early 1980s the United States Army Corps of Engineers filled in more land and built diversion dams and retaining walls to force the water away from Terrapin Point. Altogether, 400 ft (120 m) of the Horseshoe Falls was eliminated. Due to erosion, the falls will continue to move in relation to the boundary line in the future. 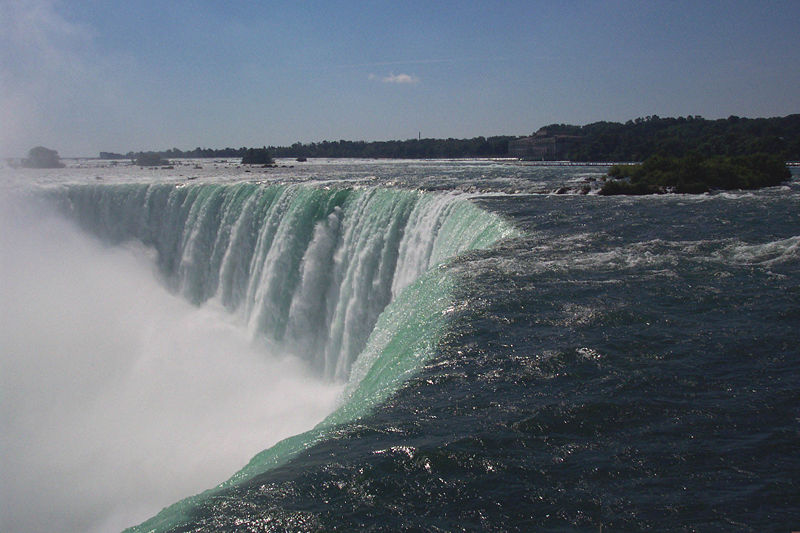