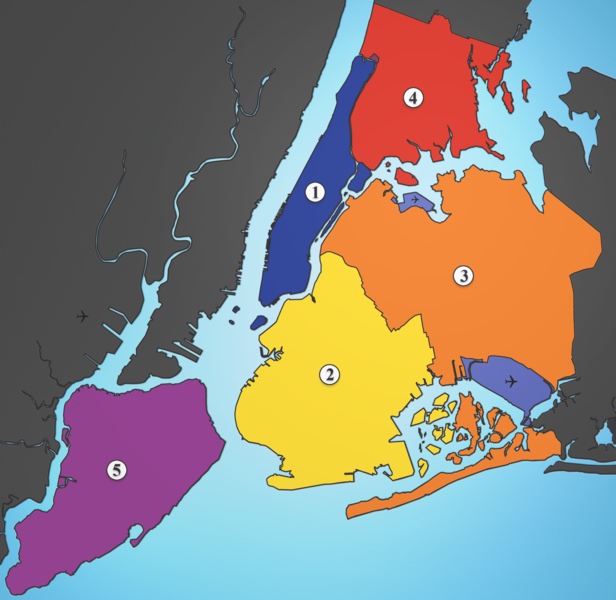 In New York City, a borough is a unique form of government which administers the five fundamental constituent parts that make up the consolidated city; it differs significantly from other borough forms of government used in other parts of the Tri-State Region and elsewhere in the United States.

New York City is often referred to collectively as The Five Boroughs; this phrase is used to refer to New York City as a whole unambiguously, avoiding confusion with any particular borough or with the greater metropolitan area. It is often used by politicians to counter a focus on Manhattan and to place all five boroughs on an equal standing.

Unlike most American cities, which lie within a single county, or, at most, constitute a county in themselves, each of New York City's five boroughs is coextensive with a county of New York state:

Each borough is represented by a Borough President and has, with the exception of Manhattan, a borough hall (the same functions, and others, reside in the Manhattan Municipal Building). Since the abolishment of the Board of Estimate in 1990 (due to a 1989 ruling of the U.S. Supreme Court) the Borough President now has minimal executive powers, and there is no legislative function within a borough. Most executive power is exercised by the Mayor of New York, and legislative functions are the responsibility of the members of the New York City Council. Because they are counties, each borough also elects a District Attorney, as does every other county of the state. Some Civil Court judges are also elected on a borough-wide basis, although they are generally eligible to serve throughout the city.