New York City Hall is the seat of New York City government, located at the center of City Hall Park in the Civic Center area of Lower Manhattan, between Broadway, Park Row, and Chambers Street. Constructed from 1803 to 1812, the building is the oldest city hall in the United States that still houses its original governmental functions, such as the office of the Mayor of New York City and the chambers of the New York City Council. While the Mayor's Office is in the building, the staff of thirteen municipal agencies under mayoral control are located in the nearby Manhattan Municipal Building, one of the largest government buildings in the world.

New York City Hall is a National Historic Landmark and is listed on the National Register of Historic Places. The New York City Landmarks Preservation Commission designated both City Hall's exterior and interior as official city landmarks in 1966 and 1976, respectively.

New Amsterdam's first City Hall was built by the Dutch in the 17th century near 73 Pearl Street. The city's second City Hall, built in 1700, stood on Wall and Nassau Streets. That building was renamed Federal Hall in 1789, after New York became the first official capital of the United States after the Constitution was ratified.

Plans for building a new City Hall were discussed by the New York City Council as early as 1776, but the financial strains of the war delayed progress. The Council chose a site at the old Common at the northern limits of the city, now City Hall Park. City Hall was originally an area for the first almshouse in 1653. In 1736, there was a financed almshouse for those who were fit to work, for the unfit, and those that were like criminals but were paupers.

In 1802 the City held a competition for a new City Hall. The first prize of $350 was awarded to Joseph-François Mangin and John McComb Jr. Mangin, who was the principal designer, studied architecture in his native France before becoming a New York City surveyor in 1795 and publishing an official map of the city in 1803. Mangin was also the architect of the landmark St. Patrick's Old Cathedral on Mulberry Street. McComb, whose father had worked on the old City Hall, was a New Yorker and designed Castle Clinton in Battery Park. He would supervise the construction of the building, and designed the architectural detailing as well.

The cornerstone of the new City Hall was laid on May 26, 1803. Construction was delayed after the City Council objected that the design was too extravagant. In response, McComb and Mangin reduced the size of the building and used brownstone at the rear of the building to lower costs; the brownstone, along with the original deteriorated Massachusetts marble facade, quarried from Alford, Massachusetts, would later be replaced with Alabama limestone between 1954 and 1956. Labor disputes and an outbreak of yellow fever further slowed construction. The building was not dedicated until 1811, and opened officially in 1812. 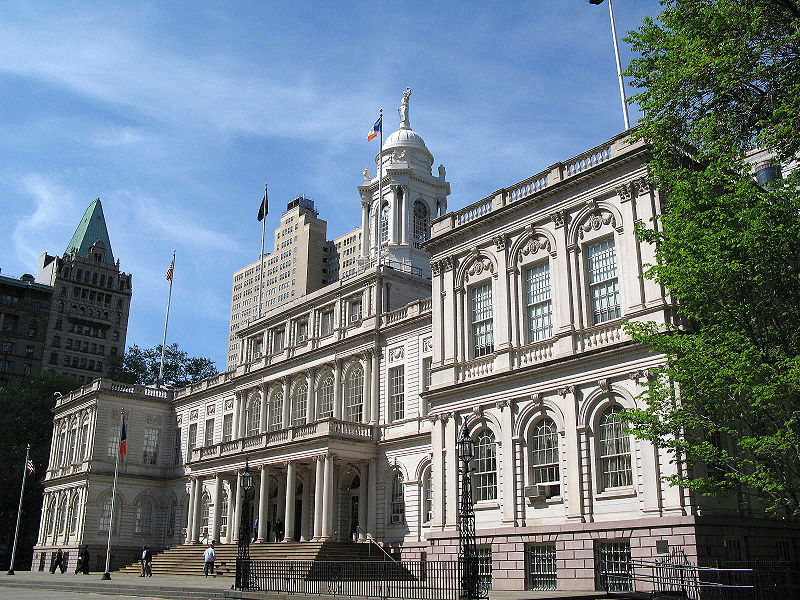