Welcome to our New York City Photo Gallery. The New York City Subway is the world's largest mass transit system by number of stations and mileage of track.

The system has operated 24/7 service every day of the year (barring emergencies and disasters) throughout most of its history; since May 6, 2020, it has been temporarily closed to the public during late nights to disinfect trains and stations due to the COVID-19 pandemic in New York City. By annual ridership, the New York City Subway is the busiest rapid transit system in both the Western Hemisphere and the Western world, as well as the ninth-busiest rapid transit rail system in the world. In 2017, the subway delivered over 1.72 billion rides, averaging approximately 5.6 million daily rides on weekdays and a combined 5.7 million rides each weekend (3.2 million on Saturdays, 2.5 million on Sundays). On September 23, 2014, more than 6.1 million people rode the subway system, establishing the highest single-day ridership since ridership was regularly monitored in 1985.

The system is also one of the world's longest. Overall, the system contains 248 miles (399 km) of routes, translating into 665 miles (1,070 km) of revenue track and a total of 850 miles (1,370 km) including non-revenue trackage. Of the system's 28 routes or "services" (which usually share track or "lines" with other services), 25 pass through Manhattan, the exceptions being the G train, the Franklin Avenue Shuttle, and the Rockaway Park Shuttle. Large portions of the subway outside Manhattan are elevated, on embankments, or in open cuts, and a few stretches of track run at ground level. In total, 40% of track is above ground. Many lines and stations have both express and local services. These lines have three or four tracks. Normally, the outer two are used by local trains, while the inner one or two are used by express trains. Stations served by express trains are typically major transfer points or destinations.

As of 2018, the New York City Subway's budgetary burden for expenditures was $8.7 billion, supported by collection of fares, bridge tolls, and earmarked regional taxes and fees, as well as direct funding from state and local governments. As of 2020, its on-time performance rate was 89% during weekdays........ 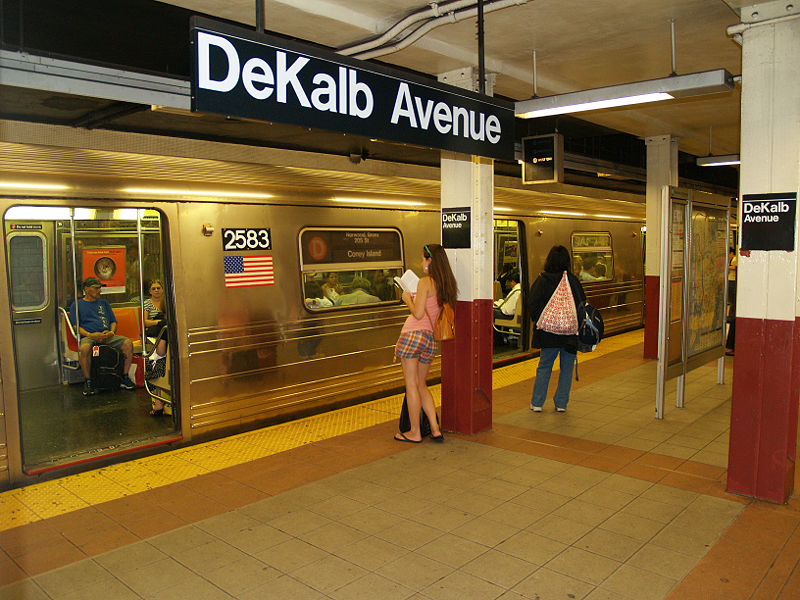