Rockefeller Center is a large complex consisting of 19 commercial buildings covering 22 acres (89,000 m2) between 48th Street and 51st Street in Midtown Manhattan, New York City. The 14 original Art Deco buildings, commissioned by the Rockefeller family, span the area between Fifth Avenue and Sixth Avenue, split by a large sunken square and a private street called Rockefeller Plaza. Later additions include 75 Rockefeller Plaza across 51st Street at the north end of Rockefeller Plaza, and four International Style buildings located on the west side of Sixth Avenue.

In 1928, the site's then-owner, Columbia University, leased the land to John D. Rockefeller Jr., who was the main person behind the complex's construction. Originally envisioned as the site for a new Metropolitan Opera building, the current Rockefeller Center came about after the Met could not afford to move to the proposed new building. Various plans were discussed before the current one was approved in 1932. Construction of Rockefeller Center started in 1931, and the first buildings opened in 1933. The core of the complex was completed by 1939.

The original center has several sections. Radio City, along Sixth Avenue and centered on 30 Rockefeller Plaza, includes Radio City Music Hall and was built for RCA's radio-related enterprises such as NBC. The International Complex along Fifth Avenue was built to house foreign-based tenants. The remainder of the original complex originally hosted printed media as well as Eastern Air Lines. While 600 Fifth Avenue is located at the southeast corner of the complex, it was built by private interests in the 1950s and was only acquired by the center in 1963.

Described as one of the greatest projects of the Great Depression era, Rockefeller Center was declared a New York City landmark in 1985 and a National Historic Landmark in 1987. It is noted for the large quantities of art present in almost all of its Art Deco buildings, its expansive underground concourse, and its ice-skating rink. The complex is also famous for its annual lighting of the Rockefeller Center Christmas Tree......... 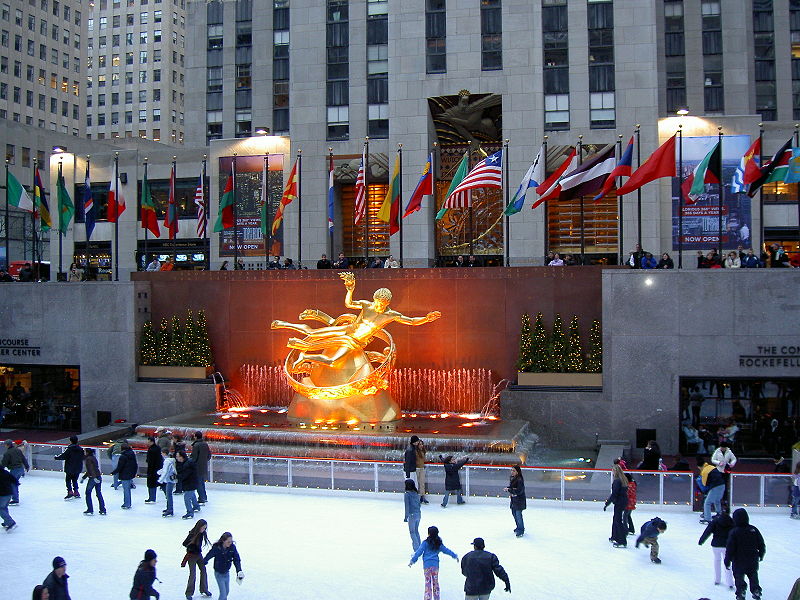