The clock in the Main Concourse of Grand Central Terminal

The information booth is topped by a four-faced brass clock, one of Grand Central's most recognizable icons. The clock was designed by Henry Edward Bedford and cast in Waterbury, Connecticut. Its mechanism was designed by the Self Winding Clock Company and built by the Seth Thomas Clock Company, along with several other clocks in the terminal. Each 24-inch (61 cm) face is made from opalescent glass, now often called opal glass or milk glass. An urban legend, which arose in news reports in the 1990s or even earlier, claimed that the clock faces were actually made of opal, a precious gem, and that renowned auction houses had estimated their worth at millions of dollars. This myth was spread by tour guides in the terminal, by its presentation as fact in Wikipedia from 2006 to 2013, and by major news publications into the present day. It was debunked by Untapped New York in 2020.

The clock was first stopped for repairs in 1954, after it was found to be losing a minute or two per day. One of the four original clock faces was damaged in 1968 by a police officer's bullet, while he chased members of the Youth International Party who staged a protest inside the terminal. The cracked face was removed in the 1990s during the terminal's restoration. It was replaced with a replica; the original is now part of the New York Transit Museum collection.

Along with the rest of the New York Central Railroad system's clocks, it was formerly set to a clock in the train dispatcher's office at Grand Central. Through the 1980s, they were set to a master clock at a workshop in Grand Central. Since 2004, they have been set to the United States Naval Observatory's atomic clock, accurate to a billionth of a second. 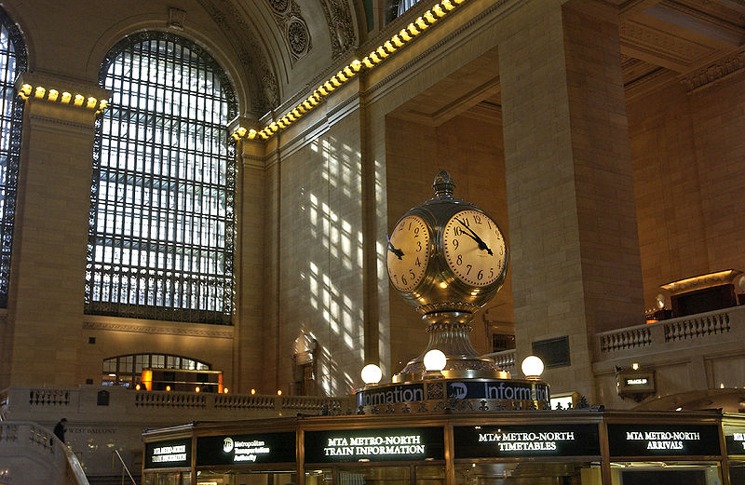 Henry Edward Bedford (1860-1932) was an American painter and sculptor who designed the four-faced clock on top of the information booth located in Grand Central Terminal in New York City. As a painter, Henry E. Bedford was best known for his studies of the Maine coast. The American Art Annual reported Bedford's sudden demise on October 29, 1932 on the train ride from Maine to Brooklyn. The death notice stated that "… he was especially fond of reproducing the scenery of Maine, and his landscapes and marines won him much praise from critics…" Henry E. Bedford is listed in key art reference publications such as Who Was Who in American Art and was a member of the Salmagundi Club. He also can be found online on Askart.com and Artprice.com.

The Bedford family had a long history in the clock and watch industry. Alfred Bedford, Henry's father, was a "member of the original Tiffany and Company and the London representative of the Waltham Watch Company." Henry E. Bedford, along with his uncle, Edward T. Bedford, and his brother, Alfred C. Bedford, were executives of the Self Winding Clock Company. Henry E. Bedford reportedly retired from the company in the mid 1920s. His obituary in the American Art Annual stated that Henry Bedford designed "several other large clocks" in addition to the famous one in Grand Central Terminal. His death announcement in The New York Times, notes "he designed the clock in the Grand Central Station and several other large clocks here [New Haven, CT] and in other cities."