The Main Concourse is the center of Grand Central. The space is cavernous and usually filled with bustling crowds. The ticket booths are here, although many now stand unused or repurposed since the introduction of ticket vending machines. The large American flag was hung in Grand Central Terminal a few days after the September 11 attacks on the World Trade Center. The main information booth is in the center of the concourse. This is a perennial meeting place, and the four-faced clock on top of the information booth is perhaps the most recognizable icon of Grand Central. Each of the four clock faces is made from opal, and both Sotheby's and Christie's have estimated the value to be between $10 million and $20 million. Within the marble and brass pagoda lies a "secret" door that conceals a spiral staircase leading to the lower level information booth.

Outside the station, the clock in front of the Grand Central facade facing 42nd Street contains the world's largest example of Tiffany glass and is surrounded by sculptures carved by the John Donnelly Company of Minerva, Hercules, and Mercury and designed by French sculptor Jules-Felix Coutan. At the time of its unveiling (1914) this trio considered to be the largest sculptural group in the world. It was 48 feet (14.6 m) high, the clock in the center having a circumference of 13 feet (4 m).

The upper level tracks are reached from the Main Concourse or from various hallways and passages branching off from it.

On the east side of the Main Concourse is a cluster of food purveyor shops which the terminal has designed as Grand Central Market. 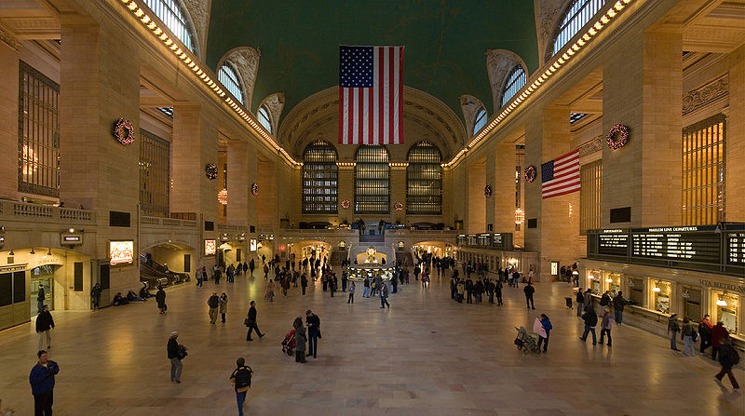