In fall 1998, a 12-year restoration of Grand Central revealed the original luster of the Main Concourse's elaborately decorated astronomical ceiling. The original ceiling, painted in 1912 by French artist Paul César Helleu, was eventually replaced in the late 1930s to correct falling plaster. This new ceiling had been obscured by decades of what people thought was coal and diesel smoke. Spectroscopic examination revealed that it was actually tar and nicotine from tobacco smoke. A single dark patch remains above the Michael Jordan Steakhouse, left untouched by renovators to remind visitors of the grime that once covered the ceiling.

There are two peculiarities to this ceiling: the sky is backwards, and the stars are slightly displaced. One explanation is that the ceiling is based on a medieval manuscript, which visualized the sky as it would look from outside the celestial sphere: this is why the constellations are backwards. Since the celestial sphere is an abstraction (stars are not all at equal distances from Earth), this view does not correspond to the actual view from anywhere in the universe. The reason for the displacement of the stars is that the manuscript showed a (reflected) view of the sky in the Middle Ages, and since then the stars have shifted due to precession of the equinoxes. Most people, however, simply think that Helleu reversed the image by accident. When they learned that the ceiling was painted backwards, the embarrassed Vanderbilt family tried to explain that the ceiling reflected God's view of the sky.

There is a small dark circle in the midst of the stars right above the image of Pisces. In a 1957 attempt to counteract feelings of insecurity spawned by the Soviet launch of Sputnik, Grand Central's Main Concourse played host to an American Redstone missile. With no other way of erecting the missile, the hole had to be cut in order to lift it into place. Historical Preservation dictated that this hole remain (as opposed to being repaired) as a testament to the many uses of the Terminal over the years. 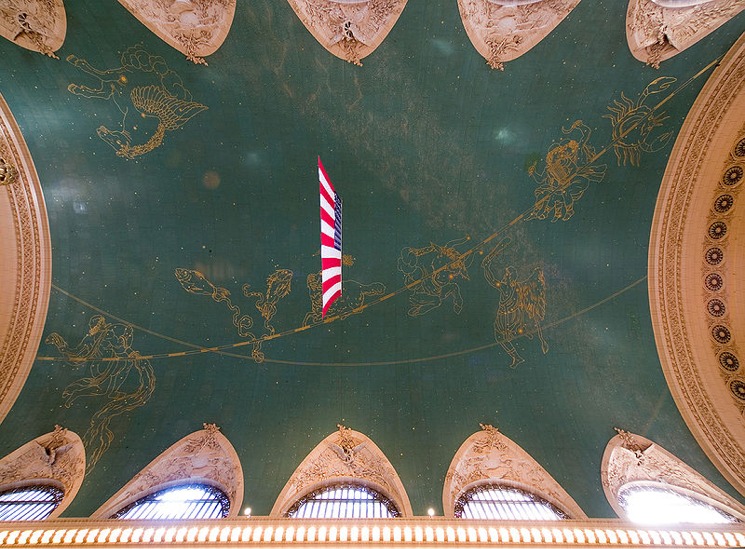 Arnoldius - This file is licensed under the Creative Commons Attribution-Share Alike 3.0 Unported license.